The TTU trials had a difficult growing season this past year and Lubbock lived up to the title given by the Weather Channel of “Toughest Weather City in the United States.” The season started out quite well with the trials being trimmed back just before spring green-up. The species all overwintered for this first year and had begun to leaf out. Then in late March we had a haboob come through the region which effectively sand blasted the plants as they were leafing out. 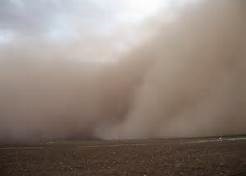 In early June, Lubbock experienced more extreme weather. We had an 80 mph hail storm which broke the utility poles at the experimental farm and shattered over 400 panes of glass at the greenhouse complex. The impact of the high velocity hail severely beat down the grasses. The following rainstorm following the hail resulted in devastating crossland flooding which resulted in the
beds washing out to the point we were forced to rebuild and replant all of the plots adjacent to the grass trials.

Excess soil was removed from around the plant bases and the beds were reformed as best as possible. The smaller statured grasses suffered the greatest damage from the hail and flooding. The southern blocks of the trial sustained the most damage resulting in the loss of two blocks of the grass trials. Lower stature grasses were obliterated. 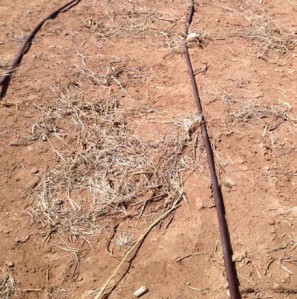 80 mph wind, hail and crossland flooding melted the rows and washed out plantings 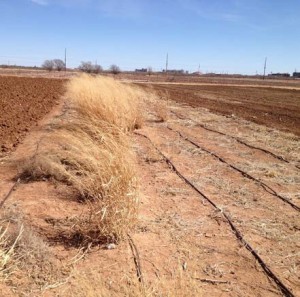 By the end of the growing season, only a limited number of species survived

The average annual rainfall this portion of the South Plains is 18”; however, during 2013 rainfall was 10″ resulting in the third year in a row with below average rainfall requiring frequent supplemental irrigation. The experimental farm has an Amarillo fine sandy loam soil with a pH of 8.2. Less than 1”of precipitation occurred between October and this past February. Drought tolerance remains a key factor for success of these species and the growthier Panicums appeared to be the best at withstanding the weather extremes.